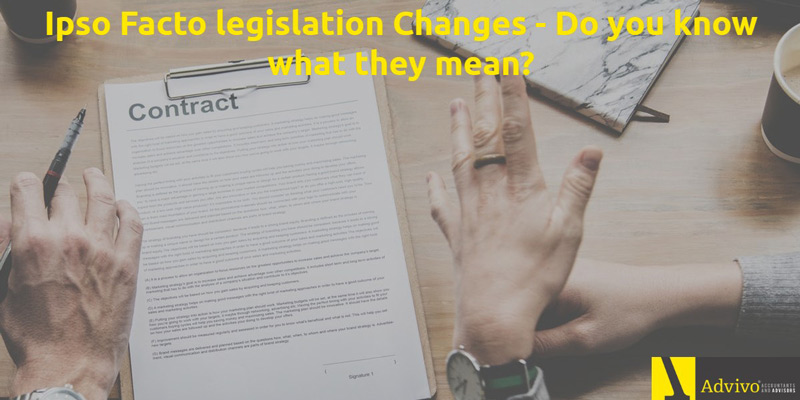 As part of the federal government’s reforms on insolvency and assisting businesses to trade through difficult times without going into some form of administration, there have been two major legislation changes announced in last year’s budget. The first of these was the Safe Harbour Legislation for company directors, which has been a law for several months. This removed some of the fears of prosecution for trading a company whilst potentially insolvent.

On the first of July 2018, the second tranche of legislation designed to assist businesses trading through difficult times becomes law. The “Ipso Facto” legislation introduces a stay provision, which affects the enforceability of “ipso facto” clauses in contracts during an event of insolvency, administration or scheme of arrangement.

For as long as they have been in existence ipso facto clauses have destroyed value in commercial contracts. They allow counter-parties to terminate, or suspend contracts, where an insolvency event occurs. This act is value destructive for contract reliant businesses and leaves stakeholders with significantly diminished returns. In many cases preventing viable businesses from trading through short-term difficult times.

The definition of ipso facto is: “by that very fact”.

Unfortunately written into almost every contract is a termination provision, known as an ipso facto clause that allows a counter-party to terminate or modify a contract in the event of an insolvency, bankruptcy or receivership for the settlement of either party’s debts (even if there is compliance with all other contractual terms).

The ipso facto stay will be effective on and from 1 July 2018, will apply to all contracts, agreements, arrangements etc. entered into on or after that date. The ipso facto provisions will limit the options of a party to enforce a right and terminate or amend a contract, when a company has entered into a formal insolvency, regardless of the other party’s continued performance of its obligations under the contract.

What does this mean for you?

Many of standard form contracts / contract precedents involving individuals and companies may require an amendment to reflect the new regulations, from July 1, 2018. Existing contracts will remain valid, however, if you are using standard contracts for the likes of credit applications and agreements you should review these and update accordingly.

The reform seeks to prevent suppliers and other contractual counterparties from terminating a contract, with a company in administration solely on the basis of its insolvency or formal administration. This, in turn, gives the company reprieve to continue trading during a formal restructure, preserve the value of its business and / or facilitate the sale of the business, we can help with all of these if you are experiencing problems, and if the legislation removes what was a substantial barrier to a turnaround in the past.

Advivo Accountants and Advisors may be able to help you if you are experiencing financial difficulty.