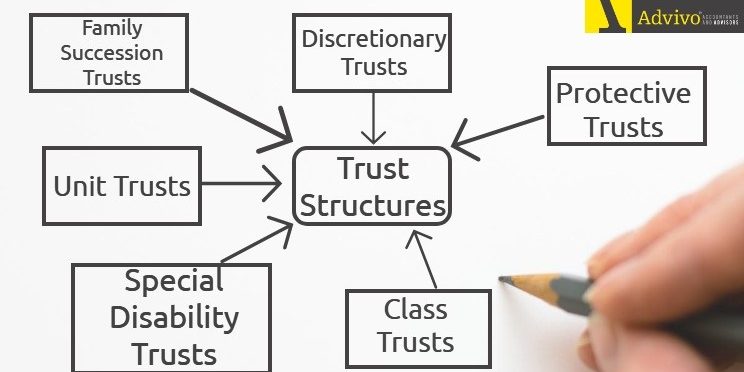 The Importance of Structuring Your Business Right

At Advivo, we find when we start looking at structuring businesses for clients, there are two great drivers behind the discussion. These are:

In the course of evaluating their circumstances and making recommendations, it is fairly rare that a trust structure fails to make an appearance somewhere in our recommendation. The reasons why can be seen in the below examples and alternative versions. We think it is easier to use some real-life examples to help you understand.

Michael owns a profitable business that runs itself without the need for his involvement. The business is structured via a company and earns enough each year to enable Michael to take $200,000 per year as franked dividends. After the imputation credits attached to the dividend are considered, Michael has an additional $26,890.10 of tax to pay for the year on those dividends.

Had Michael set up the company with a discretionary trust holding the shares, Michael could be splitting the tax on dividends with his wife who has no income, saving $20,000 in tax every year.

One year, Michael wants to draw an additional $100,000 to spoil his wife with some new jewellery. The tax on the additional dividend costs Michael an extra $26,896.56 in tax, above what he already has to pay on the usual dividend.

Again, with the right structure in place, this additional tax could be reduced by nearly $7,000 by sharing the tax on the dividend with his wife.

During a holiday to Las Vegas, Michael developed a gambling addiction that resulted in his having to sell half of his business to a loan shark in forgiveness of his debts to avoid losing the lot and becoming bankrupt.

With the right structure and safeguards in place, Michael can ensure he holds no personal assets and declares bankruptcy without fear of losing his business. He will, however, have a lot of other issues to deal with (such as that guy out the front from the loan shark’s office hefting a baseball bat).

Michael’s business is sued for breaching someone else’s IP and loses the case. A judgement for millions of dollars is handed down and the company is forced to sell its business to pay the judgement. Michael’s income stream has ended and his asset is now worthless.

Michael is dying. He decides to sell the business and manages to find a buyer willing to pay him $8m for the shares in the company. Because he doesn’t qualify for the Small Business Capital Gains Tax Concessions but has held the shares for more than 12 months, Michael has to pay $1,880,000 tax on the sale (as he had already taken his dividends for the year). He is then able to bequeath $612,000 to each of his 10 grandchildren.

Michael’s grandchildren are all adults who are studying and do not earn any income. He decides to pass on their inheritance whilst he is still alive and distributes $800,000 via his trust from the sale to each of the grandkids, along with a $161,000 tax bill each. Michael has been able to pass on nearly $27,000 extra after tax to each of his grandchildren because of his asset structuring.

As demonstrated above, with the right structuring, better outcomes and more flexibility can be achieved. It is, however, very important to realise that as soon as ownership of assets is in place it may be too late to achieve a good, flexible and tax-efficient structure without having to pay significant transaction costs to get there.

Please talk with us at Advivo so we can assist you in planning your business structure before it’s too late. Get in touch with us today.